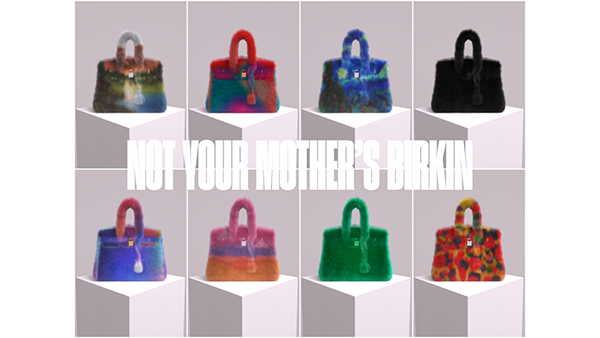 Hermès, the French luxury company with a market capitalization of €142 billion ($162bn), has sued the artist, digital creator and NFT creator Mason Rothschild, who designed the MetaBirkins artworks protected by NFTs. The litigation was filed at United States District Court for the Southern District of New York on Jan 14th 2022.

Hermès accuses the NFT creator of being “a digital speculator who is seeking to get rich quick by appropriating the brand METABIRKINS for use in creating, marketing, selling, and facilitating the exchange of digital assets known as non-fungible tokens (NFTs).” It continues that the “METABIRKINS brand simply rips off Hermès’ famous BIRKIN trademark by adding the generic prefix ‘meta’ to the famous trademark “BIRKIN”. 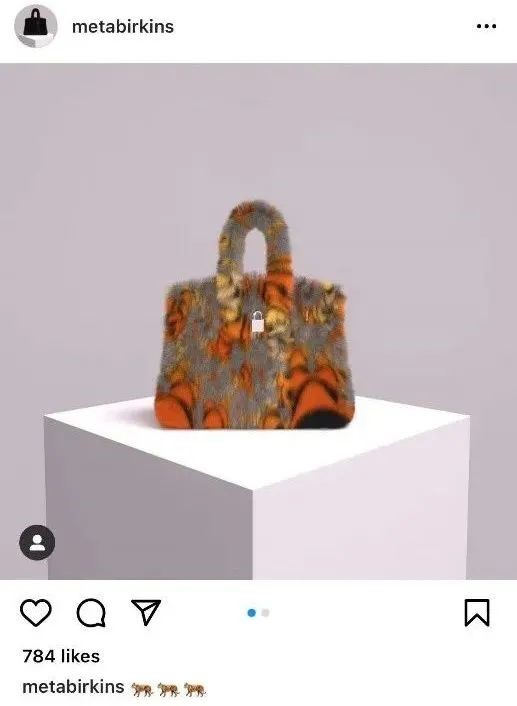 Indeed, Hermès has a long list of trademarks, and the NFTs most certainly show Birkin-like bags. The designer created 100 digital faux fur handbags as a “tribute to Hermès’ most famous handbag.” Some of the digital assets have re-sold for more than $40,000 and according to NFT marketplace Rarible, the collection has turned over more than $1.2 million.

Rothschild, instead, made a statement claiming that the designs of METABIRKINs are simply a creation of art. 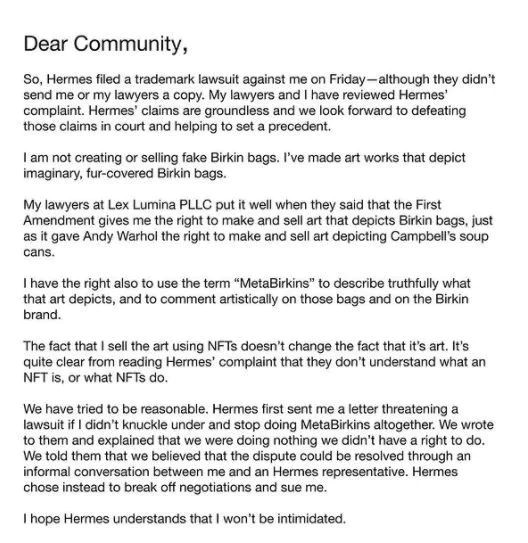 In mid-December, Hermès sent a cease-and-desist letter to Rothschild and persuaded OpenSea to take down the NFT listings. Attached to the letter was a long list of trademarks, with the term ‘Hermes’ covering almost every class but not any digital goods.

Regarding Hermès trademark, one class was canceled relating to electronic “images, sound and data concerning wearing apparel, shoes, handbags, watches,” and more. The cancellation refers to a lack of evidence of continuing use. 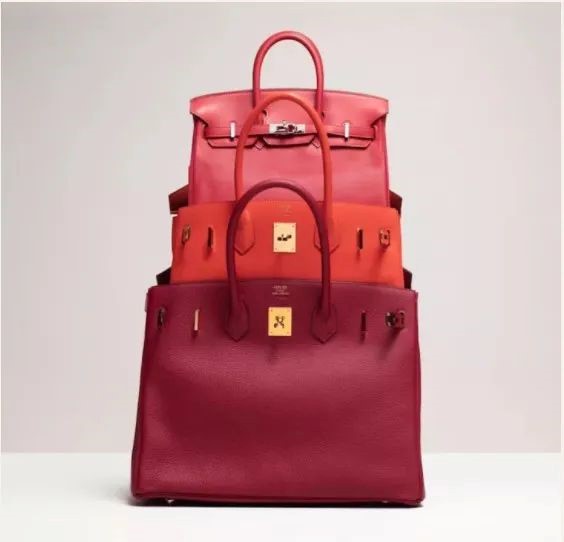 The Birkin trademark is a lot narrower and relating to handbags which it appears to be physical handbags. However, it does include the handbag design, which could very well be an issue for Rothschild. 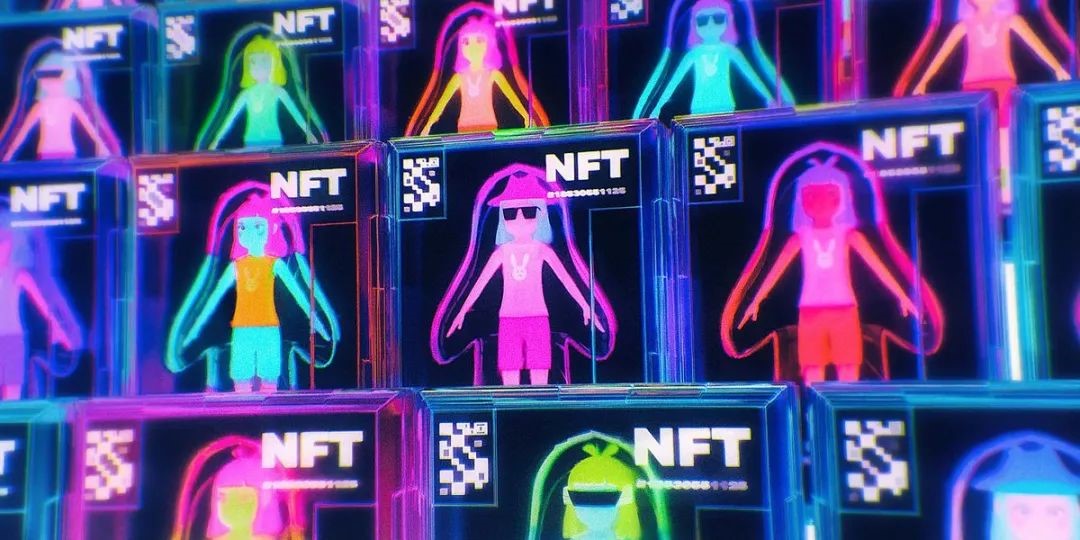 We would also like to touch a little bit from the technical point of view. Apart from claiming trademark infringement where quoting infringement upon “Hermès” (on multiple classes), “BIRKIN” (on class 18) and the trade dress of the bag, Hermès also claimed unfair competition under 15 U.S. Code § 1125 (a)[1] and 15 U.S. Code § 1125(c)[2]. We believe this is the miscellaneous protection claimed by Hermès based on below reasons:

The lawsuit just began and we will wait to see it will be play out in court. Fashion brands and any other companies interested in cryptocurrencies and NFTs must be aware that they need adequate trademarks that cover digital goods, and they also need to be creative when going through similarsituation as Hermès.

(A) is likely to cause confusion, or to cause mistake, or to deceive as to the affiliation, connection, or association of such person with another person, or as to the origin, sponsorship, or approval of his orher goods, services, or commercial activities by another person, or

(B) in commercial advertising or promotion, misrepresents the nature, characteristics, qualities, or geographic origin of his or her or another person’s goods, services, or commercial activities,shall be liable in a civil action by any person who believes that he or she is or is likely to be damaged by such act.

[2] Subject to the principles of equity, the owner of a famous mark that is distinctive, inherently or through acquired distinctiveness, shall be entitled to an injunction against another person who, at any time after the owner’s mark has become famous, commences use of a mark or trade name in commerce that is likely to cause dilution by blurring or dilution by tarnishment of the famous mark, regardless of the presence or absence of actual or likely confusion, of competition, or of actual economic injury. 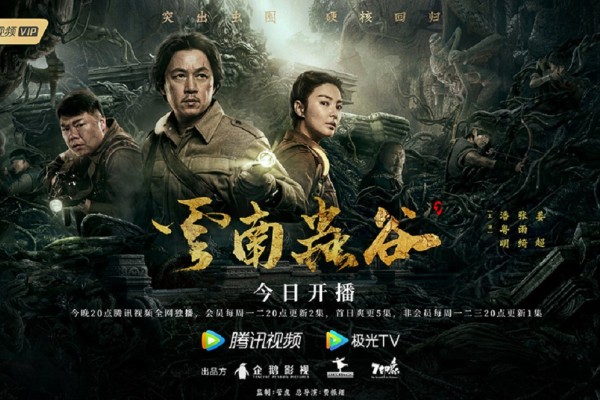 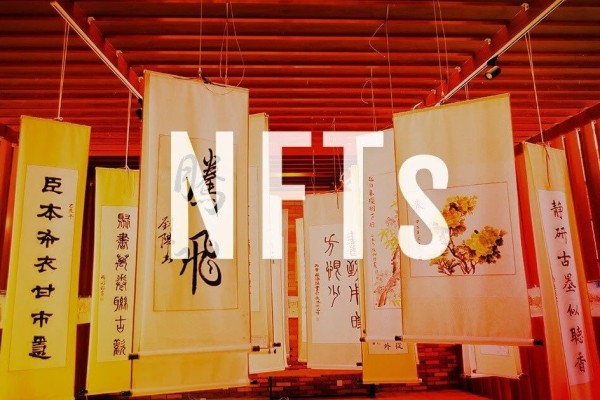 All you need to know to advertise with NFTs in China